…I will pass through Egypt and strike down every firstborn—both men and animals—and I will bring judgment on all …. I am the Lord. The blood will be a sign for you on the houses where you are; and when I see the blood, I will pass over you. No destructive plague will touch you when I strike Egypt. Exodus 12:12-13

Then Moses said…”Go…slaughter the Passover lamb.  Take a bunch of hyssop, dip it into the blood in the basin and put some of the blood on the top and on both sides of the doorframe.  …When the Lord goes through the land to strike down the Egyptians, he will see the blood on the top and sides of the doorframe and will pass over that doorway, and he will not permit the destroyer to enter your houses and strike you down.”  Exodus 12:21-23

…Christ, our Passover lamb, has been sacrificed.  1 Corinthians 5:7

The sun will be turned to darkness and the moon to blood before the coming of the great and dreadful day of the Lord.  Joel 2:31 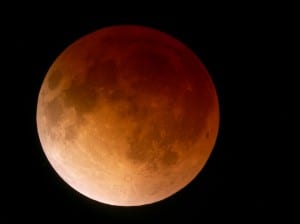 What could Passover, Good Friday, and the first lunar eclipse of 2014 have in common? Think about it with me…

Passover begins at sundown tonight. It is a day set aside by God’s people to remember their deliverance from bondage in Egypt. Other than Creation and the Resurrection of Jesus Christ, there has never been a more dramatic demonstration of God’s power than the event we refer to as The Exodus.

Passover remembers the time when the Israelites were enslaved in Egypt. When Pharaoh defied God’s command to let His people go, his mind had to be changed.  So God sent to Egypt a series of plagues one at a time, each giving Pharaoh opportunity to repent of his defiance: the water turned to blood, then frogs, gnats, and flies covered the land, followed by the death of the livestock, boils on men and animals, hail, locusts, and darkness. When Pharaoh hardened his heart against God and refused to let God’s people go, the final plague was sent. And it was the worst.

At midnight, God executed His final judgment on Egypt.  The angel of death went throughout the land and struck down all the firstborn.  From Pharaoh on his throne, to the prisoner in the dungeon, to the livestock in the barn, the firstborn died. The only ones saved from His judgment were those who placed the blood of a lamb on the doorposts of their homes and remained inside. Israelite and Egyptian alike. As a result, Pharaoh repented of his resistance, and let God’s people go.

But Passover is not only a remembrance of the power of God to save His people from judgment and to set them free from bondage.  It is also a beautiful prophetic picture of another event that will be celebrated this week.

Good Friday is a sacred, holy day that commemorates an event that took place 2000 years ago when Jesus Christ was not just crucified, but was sacrificed as God’s Lamb. On the actual day of  Passover. When you and I apply by faith the blood of Jesus shed on the Cross to our own hearts and lives, then the judgment of God for our sin passes over us, and we are not only saved from the penalty of sin, but saved from the power of sin.  We are set free from spiritual bondage.

On this year’s Passover day, in a unique way, God seems to be putting a sign of His blood on the doorposts of the heavens.  Because on this very day, the moon will turn to “blood” as it enters into a total lunar eclipse.  Could God be warning Planet Earth that judgment is coming, and giving us opportunity to repent before it does?  Could God be reminding you and me that the only salvation from His judgment is to take refuge under the blood of the Lamb?

I can’t answer those questions, but I do know one thing.  I want to make sure that I have been to the Cross, repented of my sin and rebellion against God, and claimed the blood of Jesus as my “covering.” I want to make sure I am safe–saved from God’s judgment whenever it does come, whether it comes this year on earth, or at death when I step into eternity and face a holy God.

This Good Friday, would you thank God for the Blood of Jesus by making sure you have applied it to the doorposts of your heart and life?